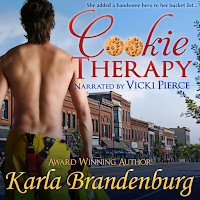 Before I get into today's post, I'm offering some distraction to everyone who is social distancing and needs a diversion. Enter the Rafflecopter below for your chance to win one of three audiobooks of COOKIE THERAPY. The redemption codes are offered through Audible.com and are only available in the US or UK (I apologize for the limited distribution, but it's an Audible thing). Winners will be chosen on Monday, March 29, 2020.

As part of a writing group I've been working with, one author asked me a question about dialog issues I had in his writing. My editor also recently posted a blog on dialog (Use Dialog to Show, Not Tell), so I thought this would be a good time to share what I told my fellow author along with what my editor shared with the world.


In my editor's blog, she writes about dialog tags. That was a lesson it took me a while to learn. When I was first writing to be published, my first critique group was very "nice" and didn't point those out to me, so when I finally found a critique partner who did, I was stunned. Some useful information on using "said."

In the comments I shared with the author who asked me to expand on dialog, I noted his overuse of characters' names. When in actual conversation with someone, we rarely use the other person’s name unless a) we’re trying to remember it or b) for emphasis.


Talk to someone else in the room with you and note how often you use each other’s names. And if you intentionally use their name, pay attention to how they respond to that. I think you’ll find they think it unusual. When I address my husband by name (rarely) he always responds with my name, more to point out he’s noted my usage than any other reason.
As a side note, years ago I dated someone who used my name intentionally, and I think that was to point out he knew “who” he was with. The usage was more because it was a “new” relationship and there were other people involved in the background. His intention was to make me feel special and was limited to those times when it was important to know he was present with me.

Another issue is unnecessary conversation. What does the following say?


The back and forth doesn't move forward. It can be condensed to convey the same thing in more concise language. Readers don't want to get caught up in an "understood" affirmation or confirmation. They want to get to the point. For instance, one can assume the paragraph prior to this dialog has already put Bill and Joe in the same room, and one can reasonably assume they've already greeted each other.


"I don't know what to do with myself now that social distancing is a requirement. I've stocked up on my reading materials, but how long can this go on?" "The movie stations are streaming classics, and some of the new releases are out early. I figure those will hold me over when my eyes get tired."

You get a whole lot more out of this exchange than the previous. Another thing to note is action beats. Sometimes words can be left out if their actions demonstrate their response. An example of this might be if someone insults someone else and the response is flipping them the bird.

I'd also pointed out a place in the story where the police force shows up to the scene of the crime. When they arrive, they stop to introduce themselves and their position. "I'm Officer Joe Keebles and I'm with the County Police Department." Point #1 is that the uniform identifies them. The people they're introducing themselves to called for the police, so they're expecting the police, so when two police officers arrive, those officers don't need to identify themselves as police. I'm also not sure they would stop to introduce themselves right away (and I could be wrong about that), but they'd be more focused on stemming the crime which is still happening. Introducing themselves stops the action and takes the reader out of the tension in the scene.

One last thought on dialog. While you want it to mimic natural conversation as closely as possible, because it’s written, it should be more condensed, leaving out the “you know” fillers people often throw in (unless it’s a character trait) or other “filler” type words. Not every comment needs a reply, and yet you don’t want to skip a reply when one is warranted. Sometimes actions speak louder than words. What makes a bigger impact? Words or actions?