There are certainly enough distractions over the course of a day to keep me away from my keyboard, or away from the work in progress even at the keyboard, but with a number of them now eliminated, I've run into one more. Hence, the subtitle of this post.

The Big Guy and I went to exercise at the pool last week, and when we came back, I put my watershoes in the utility sink to drain and forgot them there.  Usually, I put them by a window, in the sun. So imagine, the next time we went to the pool, I retrieved my watershoes and they were still wet. And stinky. Fortunately, they weren't showing signs of mold or mildew yet, so I washed them and took them along. Lesson learned. When we came home, I put them where I usually do, like I should have done the time before, but The Big Guy figured  he’d help me and moved them for "optimal air flow for drying."

As background on this, The Big Guy is an engineer, so he has a certain way of doing things. A certain way of organizing things. And yes, he's a little OCD. When I load the dishwasher, he moves things around because, apparently, I'm not balancing the load properly. When we come home from the grocery store, there is a certain way to put some things in the refrigerator. Most of the time, I don't care. He can do whatever makes his OCD happy. I'm generally much more laid back, but sometimes... 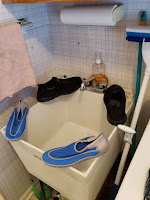 Sometimes, I don't WANT him to rearrange my stuff. My shoes have rubber soles (I'm feeling a Beatles reference here). They aren't going to get 360 degree air flow.

But I digress. What does this have to do with writing? Well, it goes to state of mind. Today, he annoyed me with his OCD and now I'm walking around reacting instead of letting it roll off - the way I normally would. Normally I DON'T care enough to react, but today... Well there are enough other things going on in the world that it's one more thing to add to a mood.

HOWEVER - it's also an excuse. Just because I decided to get into a snit doesn't mean I can get away with not writing. Pick yourself up, dust yourself off. Let it go, let it go... (Elsa, anyone?) and get the job done.

Oh, and contrary to what the song says, the cold DOES bother me (anyway), and we're getting winter way too early this year.

I guess my rant is over. Despite the imperfections of human response, I'm living my happily ever after. And now, time to get back to work writing!
at 5:14 AM

Email ThisBlogThis!Share to TwitterShare to FacebookShare to Pinterest
Labels: Procrastination